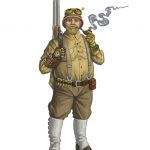 13s 4s 18s 6s £35 12s 1s 1s 10s 4d = £38 5s 4d add in shoes, tobacco and we’re up to £40 not counting the unknown price for the power gloves. That’s not terrible, much the same look could be had for £25 cheaper if we went with a colonial export or gamekeeper quality shotgun and lesser pocket watch. Odds are we’ll go with a free set of clothes or an outfit for characters as is the custom these days.

Our hunter is going to be a CR one Combatant, Soldier, with the Hunter Fighting Style. I put his +4 into Charisma, +2 into Wisdom, and +1 into Dexterity.

Our double barrel is going to be a double-barrel shotgun, but in the period people made double rifles, as well as double-barrel setups with one rifle barrel and one shotgun barrel. In India, people had Howdah pistols and rifles that had up to four barrels in a pepperbox arrangement, eventually, we’ll cover all these odd ducks.

Right now I want to settle the power gloves, Cestus Battlegloves do 1d4 lethal bludgeoning damage which is more than the early unarmed strike, and don’t take charges. The Cestus are basic melee weapons, in Armory the Shell Knuckles are still basic, use ammunition instead of batteries, and do 3d4 bludgeoning at 6th level. I’ve previously called Brass Knuckles 1d4 bludgeoning unpowered and those should be basic. So how do I differentiate steam-powered gauntlets in the tiny amount of wiggle room that’s allowed for a level 1 weapon? In Core there aren’t many comparable level 1 Advanced weapons, Armory has the Ice Needle which is powered and while still doing 1d4 splits the damage over Cold and Piercing, perhaps our power glove could be 1d4 Fire and Bludgeoning? At level 2 the Pulse Gauntlet does Bludgeoning and Sonic and has Knockdown on Crit. The two-handed Battle Staff has Knockdown at level 1. So do we make a one-handed level 1 Knockdown weapon, say our guy bought some illegal level 2 steam gloves, forbidden by Queensbury rules, from the old bare-knuckle circuit in London before he left or they’re just level 1 battle gloves with an integrated watch and compass because sometimes you need to know when and where you are without putting your gun down. I’m leaning towards a one-handed level 1 weapon with Knockdown, it doesn’t even come into play unless the user rolls a crit.

With Earth Shotguns the pattern gains one inch of spread for every yard distance traveled thus a pattern of the shot at 40 yards would be 40 inches. While wide that doesn’t cover an entire 5ft square much less a 90-degree cone in front of the shooter. So what’s fair

Whatever I decide I need to come up with a cost that fits the world and some other money-related matters along the way.

Survival is a class skill for Soldiers and Hunter makes Perception a Class skill as well. I put his one Master skill in Survival, it has a lot of uses. Combatants get 2 Good skills, Perception is going to be one, and Culture, very important to the Victorians will be the other.

Looking over Feats as special abilities, I am drawn to Far Shot, if he was carrying a double rifle for big game, the extra range would help a lot. With the short range of the shotgun, the extra range is also helpful.

I made him True Neutral. Frontier and Jungle life isn’t always for Lawful types. Mountain Men, Hunters, trappers, and others who live off the land and avoid civilization might tend toward Neutrality.

In the 1800s sales copy was always the common, ordinary, good, best made, finest quality, and sometimes you wonder if you should get the best or the one that’s extra(ordinary?). I think they like to use big words and the good better best that we learned in school was maybe more of a guideline to these people.

Let’s explain how British money worked back then, a pound sterling is symbolized with £, followed by little s for Shillings and then Pence which are both d and p. The LS&D came from the Latin words Libra, solidus, and denarius. The p for pence is another name for a penny. There were 20 shillings to a pound and 12 pennies in every shilling, 240 pennies in every pound. For most of the 1800s, one pound was worth five dollars, since every pound is 240 pence, equaling $5 or 500 pennies a lot of the prices in pence double, to get their US equivalent, don’t multiply pence prices by 5 you won’t get the right answer.