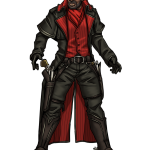 Our hunter is going to be a CR one Combatant, Soldier, with the Gunslinger Archetype, Gunslinger Dodge ability. I put his +4 into Dexterity, +2 into Strength, and +1 into Constitution.

Survival is a class skill for Soldiers l. I put his one Master skill in Survival, it has a lot of uses. Combatants get 2 Good skills, Perception is going to be important, Medicine to stay alive, Engineering to maintain your weapons, Athletics to get around in the wild, Intimidation for some gunfighters might be important.

Looking over Feats as special abilities, I am drawn to Improved Initiative and Quick Draw, the question is in the Wild West, how do you have a Gunslinger that DOESN’T have Quick Draw? People that don’t rely on cunning to get the drop on somebody, bushwhack them or bring extra guns to a gunfight.

I made him Neutral Good. Frontier and Jungle life isn’t always for Lawful types. Mountain Men, Hunters, trappers, and others who live off the land and avoid civilization might tend towards Neutrality. We know the inspiration for our Gunslinger is fighting the bad guy so let’s make him good, he lives by a code and not the law so we make him Neutral. A chaotic good gunslinger wouldn’t bother with a code.

In the 1800s sales copy was always the common, ordinary, good, best made, finest quality, and sometimes you wonder if you should get the best or the one that’s extra(ordinary?. I think they like to use big words and the good better best that we learned in school was maybe more of a guideline to these people.

Our Gunslinger comes out at $63.75 leaving plenty of pocket money from $100 starting funds even with 2 revolvers. $19.75 of that is clothes that might end up being a free outfit in the final version.