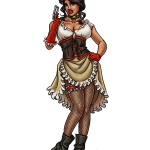 The first NPC is our Saloon Gal, historically they weren’t prostitutes, they talked to customers, encouraged them to buy drinks and sometimes danced with the cowboys. Some Saloon Gals were also card dealers. So my NPC needs to be passable at cards, dancing, and talking to people. Playing into Wild West tropes a little I also want her to be able to palm a small pistol, knife or pair of kings when necessary. So I’m giving her the Sleight of Hand skill on top of the profession skills.

I originally planned her as a CR one Combatant, I put her +4 into Charisma, +2 into Wisdom, and +1 into Dexterity. If I had wanted her to specialize in being a dealer, I might have put the +4 into Wisdom, and +2 into Dexterity, with the +1 in Charisma. I had strong feelings about her being a combatant, but she’s not an Expert the way the Doctor might be, and she’s not a spellcaster. Not skills, but skill adjacent, I gave her English and French as languages, sometimes saloon gals and soiled doves of the old west spoke a little French, all the sexy and naughty words are in French.

I received some friendly advice that she might be better be as an Expert with Operative or Envoy grafts, if your Saloon Gals is secretly a Treasury Secret Service Agent or Prinkerton Detective in disguise, then Operative might be the way to go. For our Saloon Gal played straight, not a spy, not a card sharp, we’ll go with the Expert array and Envoy graft. The Stat bonuses are the same so I will leave them in the same places. Experts get 3 Master skills at +10 and 2 Good skills at +5 this changes her up a bit. Lets say that every Saloon Gal isn’t a world famous poker player, or ballet dancer putting the +10s into her Professions skills seems a bit heavy handed.

Survival though a useful Frontier trait seems out of place, though Owen’s blog has rules for using it for riding horses. Putting a +10 into Perception might be too much, however, our canny gal has to be wary of cheats and when a customer has had too much to drink. Adding Sense Motive to her repertoire doesn’t seem like much of a stretch. Honorable mention goes to Bluff, Culture and if Sally’s grandmother was from the old country and had the sight, Mysticism wouldn’t be out of genre.

Lets get to that Envoy array, +2 Ref saves, Master Sense Motive, Bluff, Diplomacy, or Intimidate. Looks like the decision got made for me. Ability Mods, Charisma, Intelligence, Dexterity. 1st level Envoy Improvisation, Clever Faint seems too obvious, especially if she already has Bluff. Dispiriting Taunt seems in genre, Don’t Quit, Get Em, and Inspiring Boost are all in genre and all might come in handy when the obligatory Saloon fight breaks out.

I made her Chaotic Neutral. You could say saloon gals and dance hall girls are law abiding in places where drinking, gambling and the like were legal, but frontier life isn’t always for Lawful types. Moutain Men, trappers, and others who live off the land and avoid civilization might tend towards Neutrality. Unless you’ve got specific ideas about a saloon gal with a heart of gold who could be Chaotic Good, I recommend we stay Chaotic Neutral for now.