↓
Home→Jacob Blackmon→You break it, you bought it. -Old man Wiggins 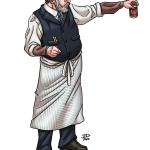 This week I’m still working on making the Starfinder NPC stat block as small as possible for as book of NPCs and Pawns that I’m working on. Per recommendations from Jeremy Todd Corff I have removed the Multiattack, Size, Reach portions of the stat block as normal or default entries don’t need to be called out. We talked about removing Resolve Points from NPCs, but the Gunslinger had an ability that can utilize RP so we left that in.

The next NPC is our Shopkeeper, looking at the picture, he’s a shirt, pants, vest, apron, a necktie, shoes, and some kind of undershirt with sleeves. He’s got two pens in his vest pocket and wears glasses. I’m going to go out on a limb and say that he’s a punctual man that opens the store at the same time every day and carries a pocket watch.

Our shopkeeper is going to be a CR one Expert, Mechanic, with one of the Experimental alternate class features, I like Apparatus or Vehicle for this as I don’t need the shopkeeper to have heavy armor or a showy weapon. Potential Experimental Apparatus; Dust Goggles, shotalashu saddle, Thermal Regulator in his apron for working in the workshop. Potential Experimental Vehicles: Exploration Buggy, Goblin Junkcycle, Ravine Crawler. I think we’ll go with the Thermal Regulator.

I put his +4 into Intelligence, +2 into Dexterity, and +1 into Constitution.

Engineering is a class skill for Mechanics. I put his 3 Master skills in Engineering, Perception, and Physical Science, it has a lot of uses. Experts get 2 Good skills, Profession Merchant, and with Medicine, he won’t be taking any customers away from Doc, but he can help out and make enough medicines for folks in town to stay alive.

I went into a general store, but they wouldn’t let me buy anything specific.

Looking over Feats as special abilities, I am drawn to Master Crafter I know you’re supposed to have 5 ranks, but NPCs don’t really get ranks the same way as player characters.

Now our Shopkeeper from the General Store could just as easily run the Old Chemist Shoppe in Victorian times, his Physical Science and Medicine skills giving him the right qualifications to run a Victorian pharmacy. You might look into a Medical Feat then.

I made him Chaotic Good. Frontier life isn’t always for Lawful types. While some who live off the land and avoid civilization might tend towards Neutrality. We know our shopkeeper is an inventor and maybe left the big cities to have enough room for his experiments. A purely lawful mechanic might set up a workshop just outside the big city, our fellow is looking to do good without a lot of rules holding him back.

Our Shopkeeper comes out at $34.50 leaving plenty of pocket money from $100 starting funds even with one snub-nosed belt pistol. $15.25 of that is clothes that might end up being a free outfit in the final version.